Research Topics
Tools: Moment tensor inversion and earthquake relocation
​
Earthquake relocation and source study are two powerful tools to investigate the style of deformation in different tectonic settings. Figure below shows a simple illustration of these techniques.
Left panel: a simplified cartoon showing the main idea behind relocation methods. Despite single event location, a cluster of earthquakes can be located together to reduce the contribution of error imposed by the imprecise velocity model. Right panel: a space-time history of the slipping motion on a fault can be approximated by a double-couple force modeling. Based on this approximation, we resolve moment tensor elements that are related to the strike, the dip, and the rake of a fault (Aki and Richards, 2002).
Figure below compares the single event location from the IRIS catalog with results of relocation of earthquake clusters in the Pawnee region, Oklahoma. We applied a source-specific station term method and a differential time relocation method based on waveform cross correlation (Lin and Shearer., 2005; Lin and Shearer., 2006; Lin et. al., 2007).

The relocation results has improved the spatial distribution of earthquakes both in the map view and at depth.
Below is an example of the moment tensor inversion and the testing of stability of the solution for an earthquake in the Zagros, Iran (Aziz Zanjani and Ghods, 2015). 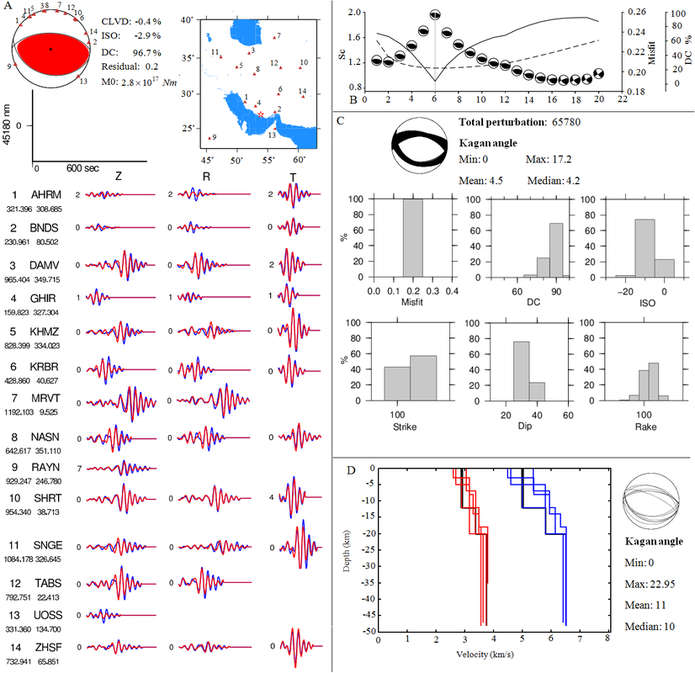 The representation of the moment tensor inversion and the stability of our solution for the earthquake (07/20/2010) in frequencies between 0.17 and 0.04 Hz (Aziz Zanjani and Ghods, 2015). We used mtinvers program (Dahm and Kruger, 1999; Donner et. al, 2013) for moment tensor inversion. A) Blue and red lines are observations and synthetics, respectively. The number beside each waveform is the value of the time shift. The number below the name of each station represents the focal distance and the azimuth of the station from the epicenter, respectively. B) The solution at different depths. Beach balls are showing the DC part of solutions. Dotted lines show the misfit between the observation and the synthetics. The solid line shows the SC value at each depth (the Sc value represents the depth with a minimum misfit and a maximum DC). The grey line specifies the centroid depth. C) The Jacknife test and the corresponding Kagan angle. D) (left) Different velocity models for S and P waves (the red line for the P wave and the blue line for the S wave), black solid lines show the selected velocity models. (right) Solutions for different velocity models and their related Kagan angles .
Induced seismicity
Based on earthquake relocation and moment tensor inversion, we can substantiate the spatiotemporal correlation between the seismicity and the wastewater injection rate. The correlation supports the idea that the 2016 Mw 5.8 Pawnee mainshock in Oklahoma was induced.

Comparison of the seismicity and daily injection rate in 2015 and 2016 before the Mw 5.8 Pawnee mainshock (Aziz Zanjani and Lin, 2017).
​New Zealand Subduction Zone
The origin and nature of the Double Benioff Zones (DBZ) for intermediate-depth (70 to 300 km) earthquakes is a matter of debate. While some people consider DBZs a prevalent feature worldwide, others suspect them confined to only some of the subduction zones as a result of specific conditions in the descending slab. Different mechanisms have been proposed to explain the stress conditions in the DBZs, such as the thermoelastic stress, the unbending of the slab, and the sagging of the plate. Existence of the DBZs has been suggested for the Hikurangi trench in New Zealand. The improved spatial resolution of earthquakes after relocation will helps us to resolve the place of occurrence and thickness of layer separation for the DBZs in the region.

Mountain Building
The Zagros is a fold and thrust belt in the southwest of Iran within a young continental collision zone that makes it a unique place on Earth for studying collisional tectonics. 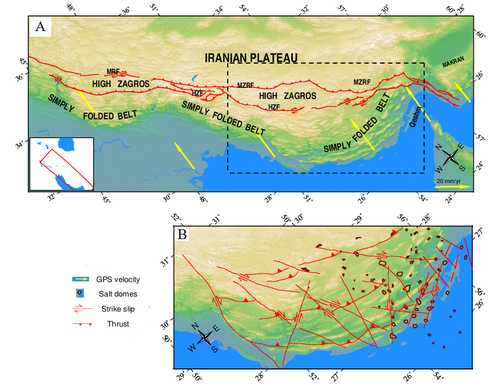 Different studies have been investigated the relation between the deformation of the sedimentary cover and the basement. We applied a multiple-event relocation analysis using HDC method (Jordan and Sverdrup, 1981; Aziz Zanjani et al, 2014) to a cluster of events in ZSFB (Figure below) and used S-P differential times of close accelerometer stations to have a control on focal depths. In addition, we calculated moment tensor solution for some of the large events using regional data. Relocation results show that focal depths dominantly are deeper than 12 km. Moment tensor inversion results show shallower centroid depths. It is plausible that the rupture begins at a deeper depth, but most of the moment releases in shallower depths and within the sedimentary column. 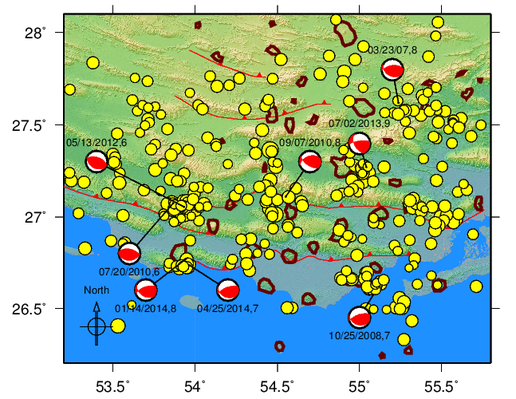 The result of the HDC-relocation and the moment tensor inversion for a cluster of earthquakes within the ZSFB zone (Aziz Zanjani and Ghods, 2015). Yellow circles show relocated epicenters in the SFB with the predominant focal depth larger than 12 km. Beach balls display calculated moment tensor solutions. The time and the centroid depth of events are reported next to beach balls. Crimson polygons show the location of salt domes.
References